The smartphone market is an ultra-competitive place. Phone makers who stand still for too long are soon overtaken. Another defining characteristic is leakages.

Ever since the iPhone was “left" in that bar, smartphone makers have been carefully leaking phone designs online ahead of actual launches. This time it is Samsung's turn. Pictures of the Galaxy Note 7 have surfaced. Samsung fans have worked themselves into a lather of speculation.

Professional leak detector, Evan Blass, (also known as @evleaks) dropped pictures of Samsung’s yet to launch Galaxy Note 7 on twitter. The images don’t look like the fanciful renderings of a sweaty palmed fan boy. To his credit, Blass has been on the money with leaked devices in the past. So if it is probable that the leaked images are the real deal, what does the new Note hold for Samsung fans? 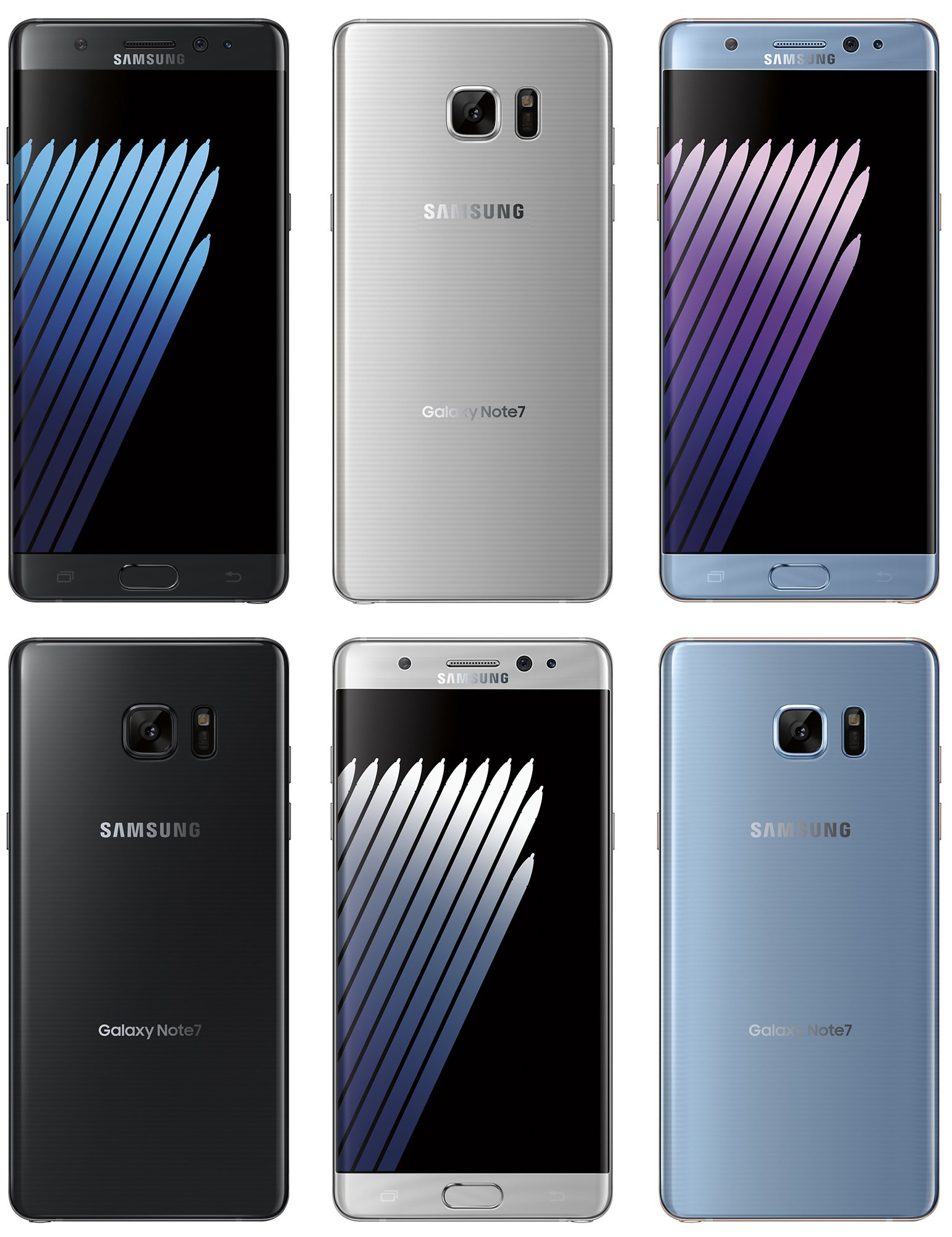 Perhaps the biggest box ticked by the Note 7 is that it has curved screen edges along similar lines to the S7 Edge. They’re visible in the images shared by @evleaks and have been hinted at by other sources for a while.

The front of the Note sports what looks to be a cutout for what many believe could be an iris scanner. In theory, it should allow users to unlock the phone just by looking at it. If it works, finicky fingerprint sensors could soon become obsolete.

Other rumours unable to be verified through leaked images include speculation that Samsung will tweak the Touch Wiz Android skin. Should this prove true, The Note will launch with a leaner, more Google-like interface.

Consensus amongst Samsung faithful is that the Note 7 specs could include a 5.8” Quad HD Super AMOLED screen and a Qualcomm Snapdragon 820 CPU. More speculation out there is that the Note 7 could come with 6GB of RAM. The rumoured 64GB of storage (expandable via microSD) will also be a welcome addition.

Like the S7 and S7 Edge, many are betting that the Note 7 will have a waterproof design and larger battery.  While camera refinements have been hotly debated, It’s difficult to see how Samsung can improve on the already excellent camera of the S7/S7 Edge.

The Galaxy Note 7 launch will happen in New York on August 2, 2016 with additional launch events happening in Rio de Janeiro and London.

Hands-on review: OCULUS Quest 2
The Oculus Quest 2 is my first and long overdue foray into the world of virtual reality, and I've been having fun.More

Jamf updates teacher and parent support for Mac & other Apple devices
The updates across Jamf Teacher and Jamf Parent apps, which are provided as part of the Jamf School offering, support remote and hybrid classroom environments.More

Hands-on review: OCULUS Quest 2
The Oculus Quest 2 is my first and long overdue foray into the world of virtual reality, and I've been having fun.More

Jamf updates teacher and parent support for Mac & other Apple devices
The updates across Jamf Teacher and Jamf Parent apps, which are provided as part of the Jamf School offering, support remote and hybrid classroom environments.More

Hands-on review: Fitbit Ace 3 - Fitbit’s newest fitness tracker for kids
The Fitbit Ace 3 is a great, sleek way to motivate children to exercise and to be healthy. It's well worth the investment.More

LEGO announces second series of VIDIYO stages, BeatBoxes & Bandmates
LEGO is once again on point with its amazing design aesthetic because the series is full of cute characters and setpieces.More

Dynabook expands education laptop range with 11.6" Dynabook E-10S
The 1.15 kilogram laptop is 19.9 mm thin, designed to be lightweight and compact.More

Vodafone guilty of nine breaches of Fair Trading Act
In a ruling from the Auckland District Court last week, Vodafone NZ was guilty of being 'liable to mislead' consumers about the nature of its FibreX service.More

NZ telco industry welcomes ComCom review into dispute resolution scheme
"We hope this review process results in a strengthened TDR scheme that is able to help even more New Zealanders if they encounter issues with their telecommunications services."More

Hands-on review: Samsung Galaxy A52
If you’re on a budget but don’t want to sacrifice all the features present in a top-tier phone, the Samsung A52 is a good investment.More

StaySafe, what3words launch app for locating remote workers in emergencies
“Adding the what3words functionality simplifies getting responders to the exact location of an incident quickly.”More

Android announces expansion to its earthquake alert system
Android has announced a new expansion to its Android Earthquake Alerts System that uses both the detection and alerts capabilities, bringing these alerts to Android users in countries that don’t have early warning alert systems. More

Game review: MLB The Show 21 (PS4 and PS5)
If you love baseball you will find this game very enjoyable. This is the first time the series will be available on Xbox consoles too.More

New iPad Pro gets the M1 treatment
Among the new iPad Pro’s features: a Liquid Retina XDR display on the 12.9-inch screen, 5G capability with cellular models, and a Thunderbolt USB-C port.More

InternetNZ discloses vulnerability that can be used to carry out cyberattacks
The vulnerability, called TsuNAME, was noticed in February 2020 in the .nz registry.More

University of Auckland selects AWS as strategic cloud provider
UoA will leverage AWS cloud to drive its digital transformation and enhance student engagement during online learning, which has been accelerated by the COVID-19 pandemic. More

Apple TV gets 4K upgrade & features a new Siri remote
If you found yourself dreaming about the day your Apple TV could broadcast videos, TV shows, and movies in 4K, today Apple has made that dream a reality.More
Hands-on review: Oppo Find X3 Lite 5G - midrange done right
For a mid-range phone, the Oppo Find X3 definitely doesn’t skimp on cameras.More
UoA researchers work with Māori to evaulate online mental health platform
Researchers want to understand what encourages and prevents Māori from using an online platform to support mental health and wellbeing.More
Kaspersky launches new course to defend users against doxing
"Knowing the threats that are out there makes it easier to take measures to avoid them, and one such threat is doxing - the act of gathering and revealing identifying information about someone online against their will."More
Hands-on review: Intel 11th-Gen Core i9-11900K and Core i5-11600K
Intel’s 11th Gen Core S-series desktop processors, code-named Rocket Lake-S are now in the wild.More
Massive WHO scam busted - 'DarkPath Scammers' group suspected
The scam campaign comprised a network of 134 websites that attempted to lure people in by asking them to take a survey for a monetary reward.More
Hands-on review: EPOS H3 wired gaming headset
EPOS has launched its first gaming headset, the H3, marketed solely under its own brand.More
Security at risk as PC users continue to use end-of-life Windows 7
"Updating your OS is an essential element of security that should not be overlooked."More
Game review: Resident Evil Village (PS5 and PS4)
It features a decent blend of action and survival horror to satisfy both new and old fans of the series. This is a must play!More
Hackers hit Apple with ransomware, MacBook design files exposed
Hackers are attempting to extort Apple in exchange for not leaking stolen files.More
Data breaches enabling blackmail, extortion and intellectual property theft
Data breaches and cyberattacks are no longer just an online issue.More
Game review: Returnal (PS5)
The fact that Returnal is rogue-like might sound awesome to some, but some other casual gamers might be intimidated. More
It’s Luigi time! Guess who’s finally joining the LEGO Mario world
“Everybody loves Luigi! With his unique personality, green cap and distinctive moustache, he has been highly requested by fans all over the world."More
Messaging app used to control and distribute malware
Hackers are using instant messaging app Telegram for remote control and distribution of malware, according to Check Point Research.More
Major shift in smartphone market - Huawei drops out, Samsung regains top spot
A major shift is occurring amongst the top smartphone vendors as the market continues its recovery.More
Apple introduces first iMac to feature M1 chip
“M1 is a gigantic leap forward for the Mac, and today we’re excited to introduce the all-new iMac, the first Mac designed around the breakthrough M1 chip.” More
NZ pricing exposed for Apple’s latest product announcements
Here’s the quick and dirty on pricing for all of Apple’s latest releases. All prices are RRP New Zealand dollars and include GST.More
Hands-on review: Huawei Band 6 and FreeBuds 4i
For the past few weeks, I’ve been going about my life with a grin on my face, thanks to these devices.More
Game Review: Outriders (PC)
Square Enix and People Can Fly step into the looter-shooter arena with their sci-fi game, Outriders.More
See all stories